View source
Stub
This article is a stub. You can help Munou na Nana Wiki by expanding it.
Spoiler Alert
This article contains spoilers and manga only information.

He can't remember anything that happened more than two years ago

Episode 1
Kyouya Onodera (小野寺 キョウヤ, Onodera Kyōya) is the deuteragonist of the series. He is one of the students who recently transferred to the island. He serves as the primary antagonist to Nana Hiiragi's serial killings, and can be considered her foil.

Kyouya is a lone wolf with no apparent interest in what is going on around him. At first glance, he gives an impression of someone dark and dangerous, to the point where Moguo says that he probably killed someone in the past. However, as the story goes by, we see Kyouya's true personality: he is a somewhat socially awkward individual, who earnestly wants to make friends but has no idea how to. He is very straightforward with his desire to make friends, as he explicitly asks Nana and Fuuko how to make friends, and to be friends with him.

The most remarkable thing about him is his intelligence and deduction. Kyouya is a logical, rational, and observant person, as shown from the beginning when he discovers that two of his classmates are in a relationship (this is based on the fact that one of them had the left side wet and the other the right side, which meant they had been sharing an umbrella). Not only that, he anticipates some of Nana's plans on several occasions, demonstrating a great capacity for analysis on his part. Due to his intelligence and ability to deduce things, he has a suspicion of whether Nana can really read minds or not.

He doesn't know much about more commonly used slang (asking Nana what "swag" and "F-boy" means) and seems to be more of an old-school type of person. He usually speaks in a peculiar way (using the outdated "omae-san", which is translated as "dear" or "kid") and has a taste for retro video games.

It has also been shown that he has various hobbies. In his room, he has a lot of books on various matters, which makes it clear that he is a well-rounded individual with a wide variety of knowledge. He's probably an otaku, which is backed up by his fondness for manga, idol music, and when he called his two classmates "gyarus" because he simply wanted to use that word.

Kyouya's immortality allow's him to take attacks that would usually kill someone, such as fire damage and poison, and it allows him to regenerate physical wounds. Although he has immortality he can still feel pain to an extent.

He can't remember anything that happened more than two years ago, so he keeps journals to explain his circumstances to himself.

He is also not good in physical combat and asked Sorano to take care of fights for him.

Kyouya serves as Nana's rival and foil. Since they are about the same level intelligence-wise, Nana is always trying to stay one step ahead of him.

Very little is known about Kyouya's past or home life, other than that he has a younger sister who came to the island before him. She has since gone missing, and Kyouya hopes to find her. 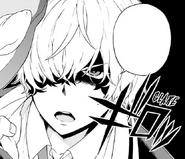 Kyouya after surviving an explosion. 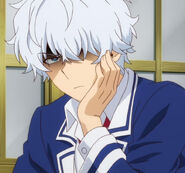