Episode 1
Spoiler Alert
This article contains spoilers and manga only information.
Stub
This article is a stub. You can help Munou na Nana Wiki by expanding it.

She is an antiheroine who was tasked with stopping the Talented from fostering their abilities by making sure they never leave the secluded island, the main setting of the story. However, she learned the truth of her parents, she turned against her former superior who is now her archenemy, Tsuruoka

When she shows her true colors, her eyes turn black (red in the anime) and her face becomes emotionless.

Nana is friendly and air-headed. She is a kind girl, as she approached Nanao amicably despite the fact that the rest of the class bullied him. She even came to admire him for his extensive knowledge, and cheered him up to become the class representative. Nana is also quite talkative and curious, to the point of interrupting classes simply because she is chatting with Nanao.

Nana's social skills are close to perfect. Despite the fact that according to her she was previously unable to make friends due to her talent, she manages to get along with all her classmates and earn everyone's trust. Also, due to her talent, she tends to speak recklessly without reading the room, which is something that she herself affirms when she first introduces herself to the class.

However, it is later revealed that this is a façade Nana uses to hide her true self, a meticulous killer. She shows no remorse pushing Nanao, with whom she had seemed to get along, off the seaside cliff. Throughout the story, we see her manipulative and cunning personality as she plans to murder all her classmates one by one while pretending she gets along with them well. She considers the talented as the true "enemies of humanity."

Nana's ruthless attitude sometimes reaches extremes, as she is capable of blaming other people for the murders she committed. Another example is her acting insensitive to Yuuka by discarding the only object she had to remember the person she loved. In the same way, her levels of manipulation are extreme, as she has an influence on the whole class and is able to pretend to cry or act like the victim to rid herself of any suspicion.

Nana is knowledgeable with many assassination techniques, such as how to make poison, and her talent for scheming is worthy of a genius. From the beginning, she managed to fool the entire class, thus making it almost impossible for them to declare her the murderer. Her ability to analyze and observe is rivaled only by Kyouya and Jin, as she deceived everyone by saying that she had the ability to read minds. The truth is, she deduces each of the things she says through simple analysis. For example, she deduced that Nanao was a loner since she saw him pretend to read a book, which meant that he clearly cared how he was seen by his classmates. She assumed that he was a nice person after seeing the cat scratch on his neck, which meant that he had tried to help a cat; and that the watch he had with him did not fit with him. So it must be a gift from someone close, and because even though he cared. Nanao ended up forgetting it in the cafeteria, he probably had complicated feelings about it. She is able to anticipate the plans of her opponents, because she thinks things carefully, calculating the way of thinking of her opponent, and thinking of all the possibilities. Usually she usually deceives her opponents through plans that go beyond what they expected.

As the story progresses, she often appears to feel stressed due to her "mission" and harbors a lot of doubt killing certain people, sometimes even questioning whether the Talented really are bad people. Her dedication to her mission begins to waver once Michiru dies to save her, and Nana is left to wonder if what she is doing is really the "right" thing. Nana is shown to struggle with morals, and figuring out what is right or wrong.

Due to the fact that Nana was manipulated by Tsuruoka since childhood, she is probably not a bad person at heart, as she does not consider her actions to be "bad," but rather something done in order to "save" humanity. After finding out Tsuruoka manipulated her and used her to further his own goals, she feels full of remorse and regret for all of the victims she killed, and nearly tries to kill herself because of the guilt.

Officially the main character of Talentless Nana, she is a chosen Talentless that was sent to The Island to exterminate all the Enemies of Humanity.

In truth, her parents were not murdered by Enemies of Humanity. They were purposefully killed by Tsuruoka to traumatize Nana, so that she would feel motivation to get revenge against the Talented.   Hide.

1. "Please die for humanity’s sake." - To Nanao as she pushes him off a cliff

3. "This guy is far more dangerous than Nakajima." - As she realizeshow smart Kyouya is

4. "I will take on the role of leader, and take control of the school." - To herself

7. "What am I wrong about? You damned stalker!" - Debuking Yūka's love story with Shinji 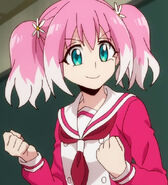 Nana's appearance in the anime
Hide.
Community content is available under CC-BY-SA unless otherwise noted.
Advertisement