View source
Stub
This article is a stub. You can help Munou na Nana Wiki by expanding it.
Spoiler Alert
This article contains spoilers and manga only information.

His body is vulnerable while he uses his talent

Rentarou appears to be shy and weak-minded, but in reality he is very twisted. He despises things or people that are overly prasied so as a form of his so-called "self expression," he slashes the throats of his victims using a knife, and leaves them to die.

Rentarou is able to separate his 'spirit' from his body. While in this state, his body is defenseless and unconscious, so he usually hides somewhere. His spirit is able to interact with real-world objects, such as holding a knife. However, he is not able to pass through walls or other solid objects.

Rentarou is firstly introduced as one of Moguo's lackeys, though after the murder of Ryuuji, his true nature is revealed. He murdered Ryuuji Ishii as a form of his so-called "self expression," and was subsequently murdered by Jin as a punishment for hurting innocent animals.

- Tsurumigawa seems to be left-handed, since he uses his left hand to hold a knife.

Tsurumigawa's spirit in the forest. 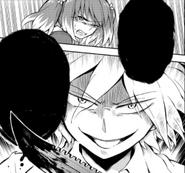